Pulling Readers with Your Research

So, you've done your research, written your story, and moved on to planning your next project. Do you file away all of that research work and let it collect dust in a drawer? No!

If you follow our blog, you know that we are HUGE advocates for recycling and reusing your work. Why not reuse your research to attract new readers?

What can you do to reuse your research?

There are tons of things you can do to reuse your research to attract readers. Here are a few ideas:


In training presentations, we've often heard authors of contemporary fiction say, "But I really didn't do any research." There are still ways to leverage some of the details of your story to attract readers!

Find ways to connect with new readers by tapping into their hobbies and interests.

Have FUN and be CREATIVE!

We've stated marketing is a marathon, not a sprint. We've advised taking the time to create your online presence and author persona before you venture into the land of social media. Why would you follow our advice? Everything in social media changes so fast why do we advocate the slow and steady approach when stories of viral bestsellers abound?

Of course your book will be that next sensation. But are you sure it's the one you just published or the one you're still writing? What if you follow our advice and keep working your career as a novelist? A novelist must do three things:


Where's the proof that those three steps will generate sales?

We've got proof!  And it's on the internet so that means it is True! <Wink, wink > 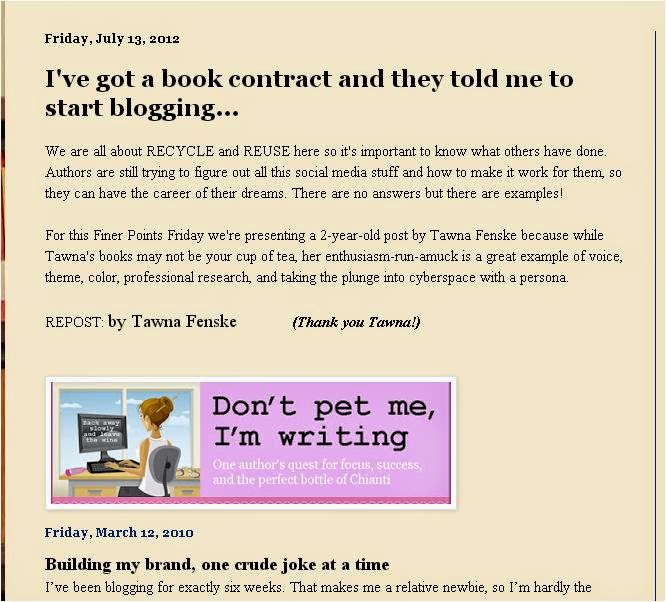 Tawna Fenske never took our advice on anything.
She already knew to Pull & Push through her Persona before we offered our first workshop. Tawna also did a whole lot of marketing and promotional activity in the first year of her career.

She no longer blogs daily, as she did as a newbie author with one book being released. Her story of "Building my brand, one crude joke at a time" was shared here, as an example of how marketing that is begun well can be maintained with fun. Now when Tawna posts a blog it is picked up by an established fan base of followers in their chosen manner of delivery. She is focused on producing more books and building her readership.

We first introduced Tawna Fenske's marketing journey to our readers in July of 2012, with a re-post of her story posted on her own blog in March of 2010. Tawna was a newbie author with one soon-to-be available novel. In 2010 blogging was the place to be in social media. Tweets were flying but there's only so much VOICE to showcase in 140 characters and hashtags unless they're used to spread the link to an engaging blog post. 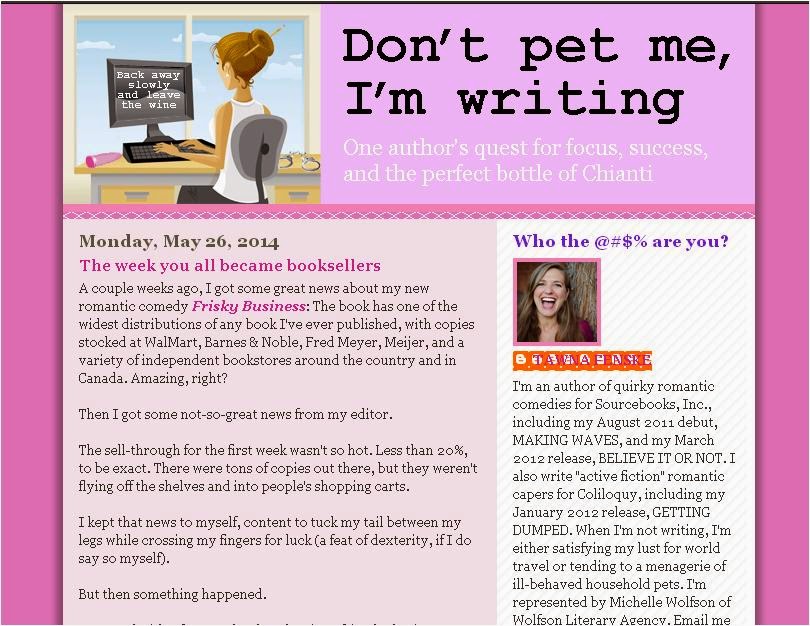 Now she has a new story how networking through social media with her fans and readers - can generate sales!

In her "day-job" Tawna interacts directly with businesses and customers through media and personally. As a novelist, Tawna understands and implements our core messages and now interacts directly with readers through various technology tools. She celebrates the sale at the Point Of Purchase. Her website is more blue and neutral to showcase her novels but her blogspot has stayed pink.

In 2010, Tawna was a newbie author using the current social media to engage readers with her voice so she'd have an audience as soon as her novel was released. Now, only four years later, her latest novel was widely distributed to many places where it could be purchased! This created the promotional challenge of how to tell potential readers that her book was worth a read!

So Tawna let her fans and avid readers know that her book was available in so many places that she couldn't list them all. Her readers went looking for them and - spread the news!!!

On May 26th, 2014, Tawna posted on her blog how her fans became booksellers of her latest novel. We are not going to recap this story. It needs to be experienced in her own words.

Please note, Tawna started blogging in 2010! Now, four years later, she has an established network of readers and followers who will not only buy her books - they will help promote them, too. Taking the long view by being consistent with the quality of her products (books & content) and voice has allowed Tawna to set a solid foundation for success. She's been discovered and her base is helping her maintain her momentum. She doesn't have to blog everyday, so now she can focus more on writing her next book!
Posted by Therese and Morgan at 4:00 AM No comments:

How to WORK a Conference

In our 23 May, 2014 post, "Conference & Conventions: To Do & What NOT To Do - Any Questions?" we talked about some of the things we learned about attending conferences and conventions. Now let's take a moment to dive a bit deeper into some strategies for 'working' a conference.

What do we mean when we say "work" a conference?

Each of these types of conference / convention goers is there for specific reasons. The attendee's primary objective is to learn and be entertained. The worker's primary objective is to network and make a sale. Both types are there to make connections. It is what they choose to do with these connections that differentiates an attendee from a worker.

How do you "work" a conference?

1) Choose your conferences wisely
There are loads of conferences and conventions that you can attend throughout the year. There are national, regional, and local shows that cover all aspects of the craft of writing and publishing industry. No matter how much buzz is associated with any given show, take the time to do some research before you sign up. Find out who typically attends. Is an editor from one of your target publishers going to be there? How about your top three agents? Will your favorite author be signing books or speaking on panels? Are there panels or classes that will help you with research or otherwise further your career?


Therese Says: I prefer local and regional long-weekend conferences where attendance is limited to 100-300 or less. I've learned my energy and attention starts to fracture after three days. I like conferences that promote a writer retreat flavor and publishing industry professionals who chose the same venue are usually my peers. If the word "boutique" applies, that's my choice.

2) Set Goals
Now that you've selected the conference(s) you want to attend, set some goals. The first time you go to a conference go primarily as an attendee. Make having fun your primary goal while you discover all the things a given show has to offer. At future shows, maybe set a goal to talk with at least five readers and two bloggers. Or maybe your goal is to pitch your latest manuscript to at least three of your target publishers in attendance.


Morgan Says: One of my key goals is to meet authors that write the same sort of books that I write. Networking with my genre peers may create opportunities for cross marketing, since we share the same audience. I also like to get to know the staff of the organization that is conducting the show.

Therese Says: I also like to interact with the staff and workers at large conferences. I've been a volunteer and that's how I've met booksellers from Australia and librarians from Norway. I have become more passionate about the global impact of a well-written good-story and why readers, like us, need more of those!

3) Leave Room for Serendipity
It is easy to 'over' schedule your time. Running from panel to panel or meeting to meeting constantly can leave you exhausted. Allow time for sitting, observing, and random conversation. Everyone at the conference is a potential reader, until you know if they are or aren't in your audience. Some of the people attending will become great contacts for your writing career. You never know who you are going to sit next to or bump into.


Morgan Says: At the last RT Booklovers Convention, I was sitting in a chair along the main walkway and had just finished a call for my day job when three woman from MacMillan Publishers stopped and  asked if they could interview me for their Young Adult blog. I signed a release form and did the quick interview. One of them was an editor who asked me to submit my work. I was literally sitting in the right place at the right time.

4) Be Prepared
Have your pitch for your latest book practiced and polished. Have a quick answer ready for the question: "So, what do you write?"Mentally prepare yourself for the social interactions at the conference. Be in your author persona. Have your business cards and promotional materials ready to give to business contacts and members of your audience. If you are signing books at a book sale or fair, confirm that your books have been ordered and find out how much table space will be available for your book signing set up.


Attending conferences and conventions can be both fun and rewarding. Take the time to plan and prepare to squeeze every ounce of opportunity out of the experience.
Posted by Therese and Morgan at 4:00 AM No comments: