Marketing Outside the Box

This REPOST originally appeared on Writer Unboxed July 7, 2013. The reader comments on that original post are great too! Thanks, Marci!


Today’s guest post is from Marci Nault, whose debut novel, THE LAKE HOUSE (Gallery/ Simon & Schuster), was a Chicago Tribune, Cape May Herald, CBS, and Amazon Premier summer read pick. She is the founder of 101 Dreams Come True, a motivational website that encourages visitors to follow their improbable dreams. Her story about attempting to complete 101 of her biggest dreams has been featured in newspapers and magazines nationwide, and she regularly speaks on the subject on radio stations and television in the United States and Canada.

Marci says:  I believe many writers have a hard time figuring out new ways to promote fiction. I decided to share the way I’ve marketed outside the box with the hope that it would spark a discussion on better ways writers can promote their material. I believe by working together we can get more people reading not only the bestsellers that get so much promotion, but the little-known writers making a name for themselves.
Marketing Outside the Box

At my first writer’s conference I asked a panel of agents, “How do you market fiction?” The room of aspiring writers and even some of the panel looked at me like I was crazy. One agent responded, “Well, that’s putting the cart before the horse. First you need to get a contract and then worry about it.”

But I was worried. I’d worked at a small press for nonfiction and had seen great books die because the writers didn’t believe they needed to promote. I’d also watched as mediocre books became great sellers because the author was willing to build their platform. I knew that the platform was everything in nonfiction, but how did the fiction writer build that same kind of following? 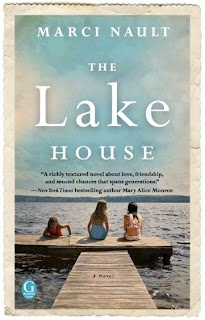 I worried even more as my novel, The Lake House, came to publication. There were online advertising campaigns, placement in stores, and book blogging tours. Reviewers raved about the story, but it seemed that everything was focused on the first six weeks and then the book would need to survive on its own through word of mouth and book clubs. I heard more than once, “No one knows what makes a book go, so move on to your next and build a career.”

I’m not the kind of person who can sit back. Call me a control freak, but I wanted a little more influence to get onto reader’s radar.

I came up with a plan outside the normal box. My book is aimed at women, so I’m sorry if my examples are focused towards the female population, but I want this article to open the conversation on how we can promote fiction better.

1) Book Launch Party – These days it’s used mostly to celebrate with friends. I decided to cross-promote with local artists, wineries, theater companies, comedy clubs, and caterers. The outcome? I had a party that would’ve cost me over $5000, but instead was only $200. I signed more than 100 books, and people still haven’t stopped talking about the book or the party. [READ ABOUT IT HERE!]

2) Networking Meetings – Insurance companies, realtors, life-coaches, and businesses throw parties for networking. When I see an event advertised on Facebook, I’ll offer to do a reading at the end of the party when everyone is done with their pitches. It adds entertainment value to the function, and if there are more than fifty people attending, I have a local bookstore handle the sales. One party led to having a large online book club pick my story.

3) Local Businesses — Look for wineries, small restaurants, and clothing stores where you can create events that cross-promote. I found a struggling restaurant and a beautiful boutique that both needed help getting noticed. We’ve combined efforts to create a Women’s Night Out. My book is featured in their places of business and local media will be covering the event.

4) Specialized Sales People — Everyone has friends who sell product lines such as Avon, Cabi, Stella-Dot. They gather their friends for home parties and display their wares at craft and street fairs. I offer to read at home parties with more than twenty guests. There’s always someone in the group with a book club. I also have relationships with many reps to have my book as part of their raffles. The sales people love opening the conversation with potential buyers by talking about my novel instead of trying to do the hard sell.

5) Direct Marketing — Find a local company that ships products daily and ask if you can place postcards in the shipments. I do this through my bridal business.

6) Your Activities — We all might sit at our desks working on our novels and marketing, but one of the best ways to promote is to have a life outside of writing. I’m an adult competitive figure skater and at each competition I ask to put postcards in the Goody Bags. Where in your life can you promote?

7) Platform – With so many books on the market it’s hard to get media if you’re not already a bestseller. Look to your life and see what kind of story you can use to promote yourself.

I decided five years ago to make a life-list of 101 Dreams that I wanted to come true and to date have completed 90 of my dreams. By talking about making my dreams come true I’m able to promote my book through more media channels.

8) Meet-Up Groups — Use meetup and find groups who might be interested in having you come to guest speak. Meetup.com is one of the fastest growing social websites where people get out and do things. There are groups of divorcee, sci-fi, yoga, mommy, pug-lovers, ghost-hunters, and everything in between. Be creative with your approach. Can they set up a special event? Can you do a tour with groups around the country?

9) Specialized Tours – My book has many characters over the age of seventy. Instead of doing a traditional book tour I focused on retirement areas and found book groups in over-55 communities. How can you reach out to your character’s demographic?

Many of these ideas focus locally, but it’s all in hitting the tipping point where more and more people are talking about your book and sharing it on social media.

This REPOST originally appeared on Writer Unboxed July 7, 2013. The reader comments on that original post are great too! Thanks, Marci!