Morgan and Therese have a workbook in process.
This Finer Points Friday post is one of the contributed articles.

Inspired by my grandparents' wartime courtship, I penned my first novel, LETTERS FROM HOME, blissfully ignorant of the marketplace. You see, the story features an infantryman during WWII who falls deeply in love through a yearlong letter exchange, unaware the girl he's writing to isn't the one replying. Little did I know that WWII settings, not to mention books about letters, were considered a no-no at the time in both women's fiction and romance. Fortunately, it was too late to turn back. The manuscript was done, and I wasn't about to give up without a fight.
And so, when I was (more than once) told my precious labor-of-love story would "never" sell, I used that discouragement to fuel my persistence and creative, dollar-stretching strategy. First, I built a unique website, entered national literary contests to gain some accolades, and gathered endorsement quotes from unbelievably merciful best-selling authors (indeed, even before I sold the book), and when it did sell, I incorporated all of this into a full marketing plan that I presented to my in-house publicity and marketing team. I then created a media kit to accompany my ARCs, tri-fold color brochures with an excerpt (instead of bookmarks), and an interview-style video (vs. a standard trailer) that could help in pitching regional television shows.

Fiction is notoriously known as a hard sell in the media world. Knowing this, I included 1940s recipes in the back of my novel to aid my TV show efforts, as well as discussion questions for reading group appeal. I actively scheduled book club visits (in person and via Skype), spoke at conferences and festivals and schools, established a social networking presence (including WWII sites), cross-promoted with authors of similar books, ran contests with the help of related Facebook groups and penpal/letter-writing blogs, donated nostalgic memory boxes to fundraising events, secured at least fifty reviews on well-suited blogs, and coordinated a large book launch party with B&N, where I read from my grandfather's WWII letters.

Other tactics included a twenty-stop blog tour, on which I gave away free copies, same as on GoodReads. I ran inexpensive ads on GoodReads and Facebook, plus a few other popular reader sites that do direct e-blasts or e-newsletters. When I ran print ads, I made sure the circulation was high and the ad was visible (I submitted articles to offset the cost). And when it came to national media, although I knew it was a long shot, I sent press kits to fifty targeted editors or producers. I figured if even one of them took the bait, the effort would pay off. I lucked out; Woman's Day graciously gave my novel a third-page endorsement (and my grandmother much-deserved bragging rights!).

Now, for the usual question: Did any of this translate directly to sales? Some of it, sure. For the most part, I'll never know. What I do know is that my publishing house took notice. They slated my book as a featured title, allowed me a generous supply of ARCs and finished copies, volunteered some nice marketing efforts, and (perhaps a related result) gifted me with beautiful packaging and amazing co-op placement.

And…the more important question: Do you feel the campaign was a success? Given the number of times I consistently heard the fantabulous phrase "I've seen your book everywhere," my answer is a resounding yes. As authors, we can't control how much people will enjoy our stories (goodness knows, I wish we could!), nor the amount of support we'll receive from our publishers or the media. But where we can contribute is in brand awareness, doing our darndest to make sure readers know our books exist. Then, we simply cross our fingers and move on to write the next labor of love. 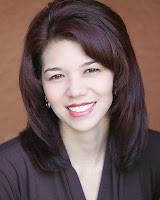 Kristina McMorris is a graduate of Pepperdine University and the recipient of nearly twenty national literary awards. A host of weekly TV shows since age nine, including an Emmy® Award-winning program, she penned her debut novel, Letters from Home (Kensington Books, Avon/HarperCollins UK), based on inspiration from her grandparents' wartime courtship. This critically praised book was declared a must-read by Woman's Day magazine and achieved additional acclaim as aReader's Digest Select Editions feature, a Doubleday/Literary Guild selection, and a 2011 Goodreads Choice Awards semifinalist for Best Historical Fiction.

Her second novel, Bridge of Scarlet Leaves (March 2012), has already received glowing reviews from Publishers Weekly and Kirkus Reviews, among many others. Named one of Portland's "40 Under 40" by The Business Journal, Kristina lives with her husband and two sons in the Pacific Northwest, where she refuses to own an umbrella.
www.KristinaMcMorris.com
Posted by Therese and Morgan at 6:00 AM