I've got a book contract and they told me to start blogging...

We are all about RECYCLE and REUSE here so it's important to know what others have done. Authors are still trying to figure out all this social media stuff and how to make it work for them, so they can have the career of their dreams. There are no answers but there are examples!


For this Finer Points Friday we're presenting a 2-year-old post by Tawna Fenske because while Tawna's books may not be your cup of tea, her enthusiasm-run-amuck is a great example of voice, theme, color, professional research, and taking the plunge into cyberspace with a persona.

Building my brand, one crude joke at a time

I’ve been blogging for exactly six weeks. That makes me a relative newbie, so I’m hardly the person to speak with authority on blogging.

Of course, being unqualified to speak with authority doesn’t mean I won’t do it – I just thought I should establish my ignorance up front in case you’ve mistaken me for someone who knows something.

My agent prodded me for months to join the social media circus, but I was leery about donning my clown costume until I’d done some research. Though I tend to prefer research that allows me to poke dead bodies or drink wine, this required a different sort of research.

I’ve worked in marketing and corporate communications for over a decade, so I knew I needed to use social media to build my brand. I read books like Shel Isreal’s TWITTERVILLE and Joel Comm’s TWITTER POWER. I pored over hundreds of blogs, making notes about what worked and what didn’t. I vowed to have a clear link between my website, my blog, and my and Twitter presence, and not to start blogging until I had a list of at least 50 potential topics.

I also vowed not to use that list more than once a week. I wanted it to be a crutch for occasional brain-dead mornings, rather than an excuse to avoid coming up with fresh, off-the-cuff ideas.

If you’ve been following this blog for awhile, you may be scratching your head right now. “You mean there’s a point to this blog? A strategy? A reason you’ve been blogging about eyebrow waxing, dog doo, scrotums, lost tampons, and recipes from Playboy?”

Believe it or not, there is.

Because if you’re the sort of person who chuckled at any of those blog posts, there’s a good chance you’ll like my books.

If your sense of humor is a bit more – well, normal, then you probably won’t become president of my nonexistent fan club. And how great is it that we can all figure that out now, rather than 17 months from now when you’re reading my debut novel and muttering, “I don’t get it, why would she use a pair of thong panties as an eye patch for a pirate costume?”

(Answer: because it’s kind of funny. And sexy, in an offbeat way).

Six years ago when Harlequin/Silhouette introduced the Bombshell line of women’s action/adventure novels, the books were wildly different from anything else they’d been publishing. There were explosions and kick-ass women who killed people, and endings that often had no commitment beyond the hero and heroine agreeing not to kill each other.

These were not traditional category romance novels – but someone forgot to tell the readers.

The line was canceled in less than two years (a month before my scheduled publication date, not that I’m bitter). Was it because the books were bad? I don’t think so. But I do think Harlequin did a crappy job with branding. They failed to let readers know what to expect.

Though I had no control over the Bombshell situation, I do have some control now. I have 17 months before Sourcebooks, Inc. releases my first romantic comedy, so I’m doing my damndest to make sure readers know what to expect from me.

This blog is my voice – it’s my brand. I like quirky humor, risqué love scenes, and stories in which normal is nice, but weird is wonderful.

If that’s not your cup of tea, no sweat.


A note from Tawna, July 5, 2012:When the lovely folks at Author Marketing 101 contacted me and asked to recycle this post I wrote more than two years ago, I’ll admit I did a mental cringe. Over the last 27 months, my life has changed dramatically. I’ve been through a gut-wrenching divorce and a heart-melting new relationship that’s going strong. I’ve changed day jobs, living arrangements, and dress sizes. When I wrote this post, I was a dumbfounded newbie author with a freshly-inked three-book deal and a debut romantic comedy still 17 months from release. Now I’m an equally dumbfounded published author who’s released three books to wonderful write-ups from The Chicago Tribune, The Wall Street Journal, and even a nomination from RT Book Reviews for 2011Contemporary Romance of the Year.

Suffice it to say, things have changed a lot for me.
Or not.

The funny thing is, I read this post now and pat myself on the back for sticking pretty true to my original game plan. The overall tone of my posts has stayed the same, as has my branding strategy. You won’t come to my blog and see posts that scream “Buy my books!” or “Come to my signings!” I might mention those things casually from time to time, but I’m a lot more likely to write about my social ineptitude at a marketing conference or the time  I waxed off my own eyebrow or the day I spit gristle in someone’s purse at a business luncheon.
Thanks so much to Author Marketing 101 for inviting me here, and for giving me a chance to revisit this blast from the past. It’s been a strange, wild ride, and I’m pleased to realize I’ve kept my butt firmly planted on the same seat of the roller coaster. 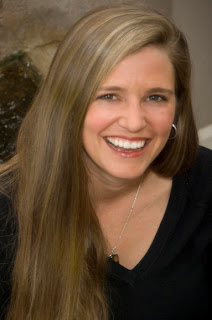 Tawna Fenske’s debut romantic comedy, Making Waves, was nominated for Best Contemporary Romance in the RT Book Reviews 2011 Reviewers’ Choice Awards. Her second romantic comedy Believe it or Not, was released March 2012 and dubbed “another riotous trip down funny bone lane,” by Library Journal.
A third-generation Oregonian who can peel and eat a banana with her toes, Tawna traveled a career path that took her from newspaper reporter to English teacher to marketing geek. She currently lives in Bend with a menagerie of ill-behaved pets.
You can find her on Twitter at @tawnafenske or blogging daily at tawnafenske.blogspot.com.
Posted by Therese and Morgan at 6:00 AM